Warning:  I use all caps way too much in this post.  And also a lot of incomplete sentences.  It was necessary.

I am a huge Jack White fan.  In any form.  Put Jack White in it, I’m a fan.  The White Stripes, The Raconteurs, The Dead Weather, Jack White solo.  Hell, put Jack White in Nickelback and I am there – front row, lighter in the air, prophylactic antibiotics at the ready.

If you’ve never heard of Jack White, I could introduce you to him lots of different ways but I’ll start with this clip from the documentary “It Might Get Loud”.

Jack White (from here on, I’ll just call him “Jack”) founded a record label he called Third Man Records in Detroit in 2001.  He produces and puts his own and other’s songs on vinyl.  You know, records.  That you have to play with a needle.  He opened the physical manifestation of Third Man Records (from here on, known as “TMR”) in Nashville in 2009.  It is the “Willy Wonka” of all record stores.  Jack is the most talented song writer, singer, and guitar player of our time, in my very humble opinion.  He also plays the piano and drums.  He is listed as #70 on Rolling Stone’s 100 Greatest Guitarists.

My husband is in Nashville tonight.  I drove him to the airport this morning.  The whole way there, I made him listen to Jack White in all of Jack’s various awesome musical forms.  I told my husband that he had to take me to Nashville this summer to visit Third Man Records.  He agreed way too easily and I should have known something was up.

My husband (from here on, we’ll just call him “E”) isn’t a big Jack fan but I made him watch this video last year.   TMR has the only working vinyl recording booth open to the public in the whole wide world.  The guy making the record is Jack’s former Raconteur’s bandmate Brendan Benson. Watch for Jack at the 3:12 mark.

So, I’m leaving the movie theater tonight with my kids.  I took them to see Captain America again. Don’t judge me, people! It was for the kids.  I’m an awesome Mom.  It has absolutely nothing to do with Bad Buckey.  I swear.  Anyway, this picture is randomly on my phone like something right out of the horror movie “Saw”.  The caption read “Where am I”?  I started frantically looking in every direction like a paranoid hummingbird on crack. 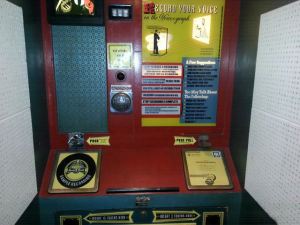 That was followed by another picture.  I just knew the caption would read “Do you want to play a game”?  I almost shit my pants until I enlarged it and saw what was pictured and then I shit my pants anyway.

E was there.  He was in my would-be musical inner sanctum.  He traipsed through my musical mecca.  He went to my modern day Graceland and breathed the very same air Jack has before I did. He not only picked up my Krispy Kreme doughnut in musical form but he licked it on all sides, put it on his dick and then documented the whole thing in pictures.

I always tell E that he has “a way” with people.  I can call and talk to a receptionist/teacher/store, whatever, and they will give me the business and by “business”, I mean they won’t give me shit.  E can call 30 seconds afterwards, speak to the exact same person as I did, have the exact same request as I did and get results.  Almost every time.

E got into TMR tonight, after hours.  A chick who works there told him they were closed THROUGH THE LOCKED DOOR.  He casually said “Oh, golly gee, I was just going to take a few pictures, Ma’am” and he was inside like the starting quarterback on prom night.  He chatted it up with the lovely TMR chick.  They talked all about the latest single Jack just dropped, which E only knew about because I TOLD HIM THIS MORNING!  E knew before I did that Weezer was there at TMR just days ago, re-recording “Susanne” in the Record Booth!  How does E know that?  His new best friend at TMR told him tonight!

Locked inside, again, after hours, with TMR chick and E was a band.  An entire band.  They just stopped by and were chatting with the TMR help.  I excitedly asked E which band it was.  He didn’t know because he DIDN’T ASK!  I know, fellow music freaks!  I KNOW!  I am having a stroke right now. I mean it, I smell toast.  I need medical aid.  This is the blog equivalent of Fred Sanford having The Big One.  Elizabeth, I’m coming home!

To E’s credit, he did buy me a tee shirt and he readily told the TMR chick that I was the Jack Super Fan who brought him to their door.  Also, Jack wasn’t there tonight as he just started his new tour so that also lessens the pain.  However, this breach will not be forgotten.  You can’t just remove a musical Krispy Kreme doughnut from your dick, unlick it, put it back in the box and act like nothing ever happened.  I’m not one to hold a grudge or anything but if any of y’all are driving by the Birmingham airport tomorrow night, there might be a doughnut licker who needs a wet wipe and a ride home.

All joking aside, check Jack White, in any form, out.  Here’s a few of my favorites.

“Will There Be Enough Water?” by The Dead Weather may not be his most popular song but I think this video illustrates his talent really well.  It’s also on one of my “Sleep” playlists because the actual recording of it is very comforting to me.  It has the sound of crickets in the background and it’s a lot quieter.  I know, sounds crazy, but it’s put me to sleep literally hundreds of nights.

And, what the hell?  A little something for everyone.  Here’s “Freedom at 21”:

And here’s a few more pics E snapped tonight.  Again, locked inside TMR.  After hours.  With some mystery band.  I’m not bitter or anything.