SPOILERS!  DO NOT READ ANY FURTHER UNLESS YOU ARE A HUGE SPIDER-MAN COMIC BOOK FAN OR HAVE ALREADY SEEN THE AMAZING SPIDER-MAN 2.  AGAIN, THERE BE SPOILERS AHEAD, LADS.

Full disclosure:  I am not a comic book reader.  I’m strictly a superhero movie fangirl.  I’ll give you that right up front.  But that’s about to fucking change.  Okay, no it won’t.  I don’t have time to read actual comic books.  I’m not a teenage boy who has nothing better to do than apply zit cream to my ball sack and collect the last 50 years of The Amazing Spider-Man but I will at least google the shit out of the original comic book plots before I see the movies based on them from now on.

For the record, I like Andrew Garfield way better than Tobey Maguire as Spider-Man.  I get that Spider-Man is dorky and skinny and not such a hot catch on the surface but I was rooting for Doc Ock’s bowl haircut to take him out by the end of Spider-Man 2.  Andrew Garfield has that way awkward thing nailed while actually being physically attractive.

I hated Kirsten Dunst as Mary Jane Watson.  You know those women who make you very deeply desire to, like, gauge their eyeballs out with a spoon as soon as you meet them?  No?  It’s just me?  Okay, we’ll move on.

I love Emma Stone as Gwen Stacy.  I love the actor and the character.  Strong, super smart, not whiny and she doesn’t make me want to grab the nearest spoon.  It’s a win for everybody.  I feel like Emma Stone/Gwen Stacy is someone I could be besties with.  We’d swap catty and intelligent texts with each other throughout the day, comment on each other’s Facebook statuses every single damned time, drink wine straight from the bottle with each other and call each other “pirate hooker” with the exact amount of love and respect you only reserve for pirate hookers.

But I won’t get that chance because Gwen Stacy died.  The Amazing Spider-Man was not amazing and he could not save her.  I sat through almost 2 hours, 20 minutes of awkward yet adorable Spidey, unable to tell the girl he loves that he loves her, only to tell her near the end, right before he didn’t save her.  Ain’t that a bitch?  I googled Gwen Stacy’s comic book back story as soon as we got home.  Marc Webb, the director of The Amazing Spider-Man 2, wasn’t just fucking with me.  Gwen Stacy dies.

We sat all the way through the end credits, just in case there were any “extras” as so often is the case with Marvel films.  As the credits started rolling, I looked over at E and said “The only thing that can redeem this movie is if Thor is in the end credits naked”.  Thor was not in the end credits nor was his naked ass, which just pissed me off even more.

E had to go to the bathroom as we were exiting the theater and as I waited with the kids, I just got angrier.  I zipped up my jacket so no one could see my Spider-Man tee shirt.  He doesn’t deserve space on my breasts anymore.  My breasts are ashamed of him.  We were walking to the car and E asked if I was still upset over the ending and I said “I am openly hostile”, in a sheer brilliant nailing of the exact emotion I was feeling at the time and still am feeling at almost 4 in the morning. 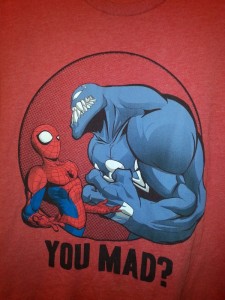 The exact shirt I wore to watch the movie. And yeah, I’m mad.

Maybe I’m on super hero movie overload because besides being pissed off at Spider-Man tonight, I have a whole slew of other issues with the super hero genre that this movie has opened up for me.

Let’s start with the villains.  They seem to usually become villains while doing their regular old day jobs.  Max Dillon became “Electro” in the movie tonight because he was doing his job as an electrical engineer and fell into a tank of electric eels.  Bruce Banner became “The Hulk” after the gamma bomb he invented as a physicist goes off.  Dr. Victor Fries becomes “Mr. Freeze” due to his career as a – guess what?! – cryogenics genius!

Those are just a few examples that I could name.  This revelation has me extremely worried over the direct correlation between potential Super Villain identities and job titles.  I mean, I’m a stay at home Mom.  I’m fucked.  How boring is my super villain going to be?  I’m one horrific laundry accident away from becoming Dryer Lint Woman.  At least Wonder Woman had the Lasso of Truth.  What am I going to use as my weapon of fear?  Static cling?  Mismatched socks?

Also, can we just please, from now on, leave the super hero cootchie alone?  Aren’t super hero’s lives stressful enough, with all the constant saving of humanity, without killing off their significant others?  Do we really want to see the aftermath of a masturbatory super hero?  If you emphatically shook your head “yes” after that question, you are a sick son of a bitch.  I like it.  Regardless, can we agree on this one?  Leave their pieces alone.