My family goes to Universal Studios Orlando and Disney World every Halloween because we can combine two of our favorite things, amusement parks and Halloween.  We also visited Universal Orlando this past Memorial Day because we had season passes but Halloween is definitely our favorite time to go.

I would like to think we’re amusement park veterans by now but I am deeply saddened.  It has come to my attention recently that I am doing this whole amusement park thing wrong, especially when it comes to those keepsake ride photos.

This is our last souvenir photo from our May trip.  We were riding the Forbidden Journey at the Wizarding World of Harry Potter.  We had talked about it beforehand and after a couple misfires, we thought we had our shit together.  We were all going to make funny faces, whatever felt right at the moment.  And quit looking at my chunky legs.  I’ve lost almost 13 pounds since then, damn it.

E has the thumbs up thing down along with the crazed Jack Nicholson look.  Gracie looks like she’s deep into the weed.  All that’s missing is a bag of Flamin’ Hot Cheetos.  Landon almost got the thumbs up right but we’ll settle for side thumbs.  I knew this picture was coming up, we’ve been on this ride dozens of times.  It’s one of our favorite rides in the park yet I can’t even manage to look at the camera.  I’m the slow one in the family.  Please use small words and refrain from sudden movements around me.

There is hope for our Halloween trip and time to improve our keepsake photo game.  Check out these inspirations and my new heroes, from the Disney Splash Mountain ride photos.  Old people with bad eyesight (I’m looking at you, E), you can click on the pictures to make them bigger.

Where the hell is my horoscope? 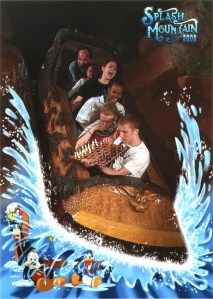 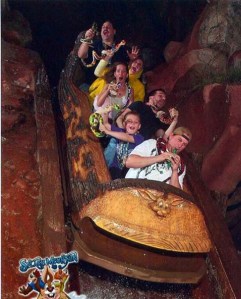 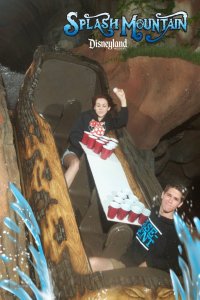 Proving that beer pong can be played anywhere. Also, they may need a 12 Step Program. 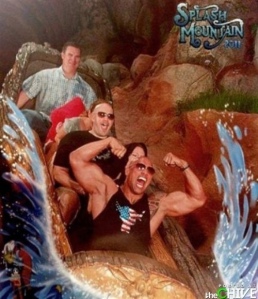 Oh, I smell what you got cookin’, Rock.

One group of friends, three different years.  They need girlfriends.  Like yesterday.  Someone find these dudes because they are my new BFFs.

And my absolute favorite:

Up your amusement park photo games, people!  I expect pictures.  Hope you’re having a great week and thanks for stopping by.