Warning:  If you are not a True Blood fan, don’t bother proceeding.  Go back to Game of Thrones or Walking Dead.  It’s cool.

I’m a huge fan of True Blood, the HBO series, which is in the middle of its final season.  I devoured the books as well, written by Charlaine Harris, waiting not-so-patiently for each one to be released and showing up at Barnes & Noble to buy my copy the very day they went on sale.  The only exception was the last one, Dead Ever After, which ended the series.  I dreaded that final book because I was going to have to bid farewell to characters who had been with me for years.  Harris made me care about these characters.   They weren’t perfect and I did my fair share of mental screaming at Sookie, Eric and Bill many times but I loved them and still do.

For some reason, I had a really bad feeling about the 13th book, the final one in the series.  Then I started reading the leaks and spoilers, which started appearing online a couple weeks before the book was released.  I decided not to give Harris one more dime of my money based on those leaks and did not buy the final book.

I still, to this day, do not understand how an author can so thoroughly and intentionally write a very flawed yet multi-dimensional character so well that she make her readers fall desperately in love with him, root for him and cherish him only to essentially kill him off in the end.  I’m talking about Eric, of course.  I have never seen an author take such an epic, deeply passionate love story between two people (I’m including Sookie now) and then end it with such dull void and mediocrity.

The bottom line is that Eric is forced to marry the Queen of Oklahoma (I just became more stupid having to type that out), sentenced to be her sex slave and forbidden to see Sookie for 200 years.  200 years is twice the normal vampire sentence and obviously Sookie won’t be alive when it ends.

Harris may have well sent each one of her readers a huge flaming bag of shit with “Fuck You” written all over it.  It would have hurt a lot less than methodically building up a 1,000 year old Viking asshole vampire over 12 books, shaping him into an unconventional hero we slowly and begrudgingly fell in love with (who could still be an asshole), only to deliberately and maliciously destroy him.  Harris broke my heart.

That is why I hope with all my might that HBO will set this shit right.  They have the opportunity to end this thing as it should have ended.  It’s not like they haven’t already wildly went off the path of the books.  The series is a completely different beast from the books and has been almost from the start.  The only piece that’s still recognizable are the characters.

One of the greatest ways, in my opinion, that HBO diverged from the books is by not killing Lafayette off.  Harris killed Lafayette off early in the book series and it made me sad then.  HBO has fully fleshed him out and he has become a vital, interesting, hilarious, flamboyant rock of the show.  He has become a truly loved and popular character to most of the TV series fan base and I’m usually smiling like a goofball every time he gets airtime.  He is fucking fabulous.

There have already been a few high profile cast members who have bit the dust on the first few episodes of this final season.  I thought it might be slowing down a bit, but then I read online today that HBO isn’t nearly done killing off some beloved True Blood characters.  This is how the following was born: 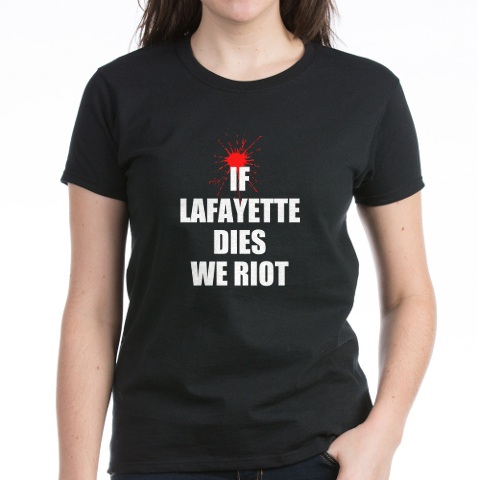 I created it, I’ve already ordered mine.  Who gives a shit about Daryl from Walking Dead?  He’s not fabulous and he certainly can’t pull off purple eyeshadow and false lashes like Lafayette can.  Bitch, please.

HBO, please correct what Harris fucked up for a huge number of her readers.  I understand there aren’t always happy endings and every book series can’t end the way I think it should.  But if Sookie and Eric don’t end up together, at least send the 1,000 year old Viking warrior out like the hero he is.  And remember…  If Lafayette dies, we riot.

Thanks for reading my True Blood rant, y’all.