Well, this is awkward.  It’s been a while.  You look good, like you’ve lost some weight.  How have you been?  How’s your Mama?  Your significant other?  Your  kids?  Job going well?  Weather been nice there?  I’m sorry I haven’t written or called in a while.  I’ll do better.  Let’s do lunch soon.  Give my best to your Mama.

I’m glad we got through that weirdness.  I am sorry I haven’t written in a while.  Life has happened and shit has gotten weird the last few months but in a completely good way.

I start school on March 1st, tuition is paid, and I’ve been kind of freaking out over it.  My friend Lulu, in all her wisdom, says to take it a bite at a time, to not look at the whole sandwich.  I get overwhelmed easily and get a bit panicky so this is excellent advice.  It’s just not so easy to follow through with sometimes.

I haven’t wanted to write here on my personal blog because it’s hard to put everything going on into words.  It’s an exciting time.  It’s just exciting times in unfamiliar waters.  I’d like to wade in but I’ll be unceremoniously dumped into the educational pool on March 1st.  I imagine it’ll be much like when my Daddy peeled me off of him when I was 5, fingernails dug into his back, kicking and screaming, and threw me into the pool without a life jacket on because that would trigger my survival instincts and “teach” me to swim.  For the record, that didn’t work out too well for either of us and I’m still not a very good swimmer.

I thought I’d dive back into things with an abbreviated edition of Tits and Bits.  Remember, Tits And Bits is a semi-regular series where I clean out my list of funny and maybe not so funny tidbits (your mileage may vary) one liners and happenings which may or may not deserve a whole blog post or I’m just too damned lazy to write a whole blog post about.  So, let’s get to it.

It’s been tough going for music fans in the last several months with the deaths of so many greats.  E took the death of Glenn Frey the hardest.  One night a couple weeks ago, I was happily doing what I do most nights.  After everyone is in bed, I love my alone time.  I either sit on the couch in complete silence and read or I have headphones on, music blaring.  This particular night, I had opted for silence but E had decided to binge listen to the Eagles on his phone in bed.  At full volume.  Without headphones.  On fucking repeat.  What does a rational woman do when she’s a mere two walls away?  Text, of course.

We’re going on a cruise with our good friends Gary and Laurie at the end of March.  Time is quickly winding down, so we’re trying to take care of last minute details.  E and I smuggle copious amounts of liquor onto the cruises we go on because we’re cheap bastards.  Or we also may or may not need a 12 step program.  You decide.  Anyway, we buy these flasks that look like shampoo and conditioner bottles.  They’ve worked like a charm every single time.  Out of concern for my friends, that they have a good time (and also don’t mooch our smuggled liquor), I sent this text to Laurie earlier.

Don’t worry, my friends.  If our liquor gets confiscated by the cruise line, we’ll blame it on Gracie.

My dear friend Lulu was ensnared in some college football this past season.  Her beloved Dad attended Iowa so she was really excited when the Hawkeyes played Michigan State in the Big Ten championship.  The winner would also get into the 4 team playoff.  Lulu is a very smart cookie but she doesn’t usually watch football.  Here’s what happened. 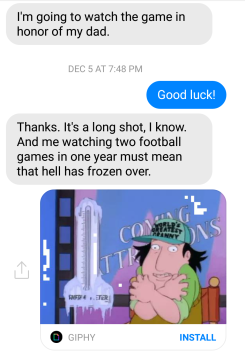 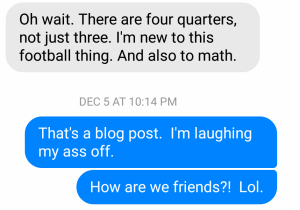 I heart you all 3 quarters, Lulu!

I do love making wagers with my friends who are fans of lesser teams.  My buddy Gregg is a Michigan State fan and a fellow beer appreciator so we made a friendly wager before our teams played each other in the playoff.  Whoever lost would have to send the other a local brew, something we can’t get in our area.  Gregg was a really good sport, wished me congratulations after the game, and I’m happy to share that I received this in the mail a few weeks later.

I’m a bit suspicious that he chose to send a beer called “Raggedy Ass” to me but I’ll take it.  Roll Tide, Gregg. Roll Tide.

I’ve kept very busy lately getting all my school admissions crap completed but I’ve also been writing a lot for the music blog I contribute to.  You can find my latest entries here. Press passes to concerts have been booming and I’ve been inspired to write about music lately.

I will try to write here more often.  I’m not sure if that’s a promise or a warning.  You decide.  But I do miss y’all.  And I mean it – say hello to your Mama for me.