I hate staying alone.  Not completely alone but like when my husband travels and the responsibility of keeping our children alive rests solely on my panic prone, chicken shit shoulders.

I’m kind of known for turning ordinary household items into deadly weapons.  I may be too panicky to load a gun when my hands are shaking and I’m about to piss myself but I can pick up a can of spray paint and kick a mother fucker’s ass.

Long ago, in my 20’s, I was at home when I normally would not have been, packing for a flight to San Francisco later that day.  I was coming up the stairs from the basement and noticed our dog was barking loudly and more aggressively than usual in the backyard.  I then saw a man outside the back door, attempting to get inside my house. He didn’t see me because he was turned away from me, trying to deal with around 25 pounds of incredibly angry Cocker Spaniel.

I ran back down to the basement and grabbed the most potentially harmful item in my line of sight, a can of gold glitter spray paint.  My husband loves to point out that any number of his tools, which were also in the basement, would have made more efficient weapons.  I still disagree with this poorly thought out opinion.  My reasoning behind the spray paint was that I could spray the intruder in the eyes, blinding the asshole.  If he still managed to get away from me, I could identify him later in the police lineup because he’d be the only one who glittered more than an amusement park fairy.

Spray paint in hand, I ran up the stairs as fast as I could, up to the second floor to get our handgun.  He must have seen me fly up the stairs because by the time I had called 911, he was gone.  I maintain that he saw the gold glitter spray paint can in my hand and decided he didn’t want to tangle with that hood rat shit.

I now realize that my quick thinking and MacGyver-like self defense skills are completely due to a horrific experience I managed to live though when I was a mere preteen girl.  When I was around 12 years old, my parents decided I was old enough to stay home alone for short periods of time but this is how I recall it:  My parents abandoned me in a dangerous metropolis with a modern day population of around 6400 citizens.  My 12 year old mind had worked out that at least half of those had to be hardened criminals, just waiting for a 12 year old freckled, gangly girl to be alone.

As fate would have it, one day I was home alone and I swore I heard someone enter through the front door. Panicking, I picked up (are you sensing a theme here?) the two objects closest to me at the time.  My Mother would find them in the living room, ready to go in case of a brawl, when she returned home.  My weapons of choice were a 12 inch ruler and a safety razor.

My parents still laugh at me to this day over that particular defensive combination.  They continue to ask me if my intent was to measure the intruder’s beard and then shave him or shave him first and measure later.  All I know is that a ruler, a safety razor and an incredibly clumsy, hyperventilating 12 year old version of myself would have fucked his shit up.  All he would have seen is freckles, brown feathered hair, shiny lips that smelled like Lip Smacker’s Dr. Pepper lip balm and big ass feet (my feet are huge but more on that in the future) coming right at him with a ruler and a safety razor.  He wouldn’t be able to grow out a proper beard to this day.  Poor bastard.

Another shining example of my home protection skills occurred several years ago in Texas.  My husband was commuting to his new job in Alabama on Mondays and then returning home on Fridays for the weekend.  The kids and I stayed behind to sell the house and finish the school year.

One night, I was doing laundry and heard what I can only describe as a bone chilling clawing noise coming from the downstairs guest bathtub, which was right next to the laundry room.  I tried not to panic.  I turned off the washer and dryer and stood as quietly as I could, barely breathing, listening.  The clawing continued.  It would stop for a minute or so but then would start again. I slowly approached the bathroom door and found that the shower curtain was completely closed.

I had watched enough horror movies to know that if I opened that shower curtain, all my children would find upon waking the next morning would be my bloody carcass and maybe one of my intact big ass feet.  So, what to do?  I ran upstairs to get the handgun and then I started calling the people on my Emergency List.

The Emergency List consisted of dear friends who knew my part time/temporary single Mom status and had valiantly volunteered to come to my rescue if needed.  Now, to be fair, I think these friends thought I’d maybe call them up some afternoon, asking for help with a light bulb.  As it were, it was 1:00 a.m. and there was probably, most likely, no…. most definitely a young but very deadly Chupacabra waiting in the bathtub to eat me alive.

I started at the top of the Emergency List.  Three friends down and not one answered the call.  Fine.  Fuck them anyway.  Number four on my list was a good friend’s husband and he was a fireman.  Perfect!  He had most certainly seen this shit before and would be skilled at wrestling a Chupacabra!

My friend, Julie, picked up right away with concern in her voice.  I told her what was going down and she didn’t even ask me if I had been drinking.  I could hear her earnestly waking up her husband, David.  She then told me he was on his way over.  I hurried upstairs to get dressed (more on that another time) and then waited at the door for David the Chupacabra Slayer.

David is an excellent story teller and I love to hear him tell this story but here is my take on The Night We Almost Died in my Guest Bath.

David says all he saw when he got out of his truck was me, standing in the open doorway, scared to death, holding a handgun and a very large butcher knife.  I don’t remember at what point I thought I needed the butcher knife for backup and I don’t even recall going to the kitchen to add it to my deadly arsenal.  It must have been my superb survival skills and adrenaline kicking in yet again.

David was holding a pretty large handled fishing net.  I congratulated myself silently.  Hell yeah, I had called the right man for the job. He would trap the monster and then I would shoot and simultaneously stab it while it was lashing about in the net.  I was kind of getting excited at this point.  I was working in conjunction with a fireman who had seen it all.  The demon currently clawing up my bathtub would not see another sunrise.  Hell no.

I fully explained the dire situation to David in my foyer and to his credit he also did not ask if I’d been drinking.  I think that counts for some solid character there.  On the other hand, he could have been scared shitless because he was talking to a crazy lady who was holding a handgun and a large butcher knife, standing only a foot away from him.  I guess we’ll never know.

David walked to the bathroom door and I followed closely behind with my weapons because I was certain he’d need my assistance.  He was about to enter the bathroom when he suddenly and a bit nervously turned around to face me.  He hadn’t even opened the shower curtain yet and now his back was TO the shower curtain.  Rookie mistake!  He could have been eaten alive in that one second alone.  I thought it was very poor judgement on his part and certainly diminished our chances of survival.

The sentence he next uttered completely shocked me and confirmed my new horrifying suspicion that he never actually had any Chupacabra Slayer training at the Fire Academy.  He said “Hey, Steph, I’d feel a whole lot better if you’d put that gun and butcher knife down”.

What the hell?  He’s dead, I thought.  He just secured his own bloody, painful death in my guest bath.  He was surely going to die without my backup.  All he had was that stupid net.  The net could restrain the Chupacabra but only temporarily, in my expert opinion.  The shooting and stabbing could commence much more quickly if I already had the weapons in my hands.  All David had to do was hold the net while actively avoiding the flying bullets and the rhythmic slashing of the enormous knife blade.  This was a simply brilliant, fool proof plan on my part.

In the end, David was unwilling to be a team player so I put the weapons down on the floor and braced myself for what was surely going to be exactly like that elevator scene in The Shining with the fountains of blood.  He moved slowly to the tub and threw back the shower curtain. 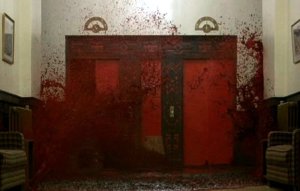 Nothing.  No Chupacabra.  No spawn of satan.  Not even a little Texas lizard.  Nothing.

I still maintain to this day that something was in that bathtub.  I heard the clawed bastard, scratching away at my porcelain. Repeatedly. I think that it somehow sensed MY predatory nature and deadly self defense abilities while it was laying in wait and got the fuck out of there when I was upstairs getting dressed.  I mean, who wants to tangle with a ruler, a safety razor, gold glitter spray paint, a handgun and a huge butcher knife?  Nothing and nobody.

After our move to Alabama was complete, my friend Sylvia, who lived in the same gated community as I had, informed me that the issue of big ass rats (my term, not theirs) had been discussed at a HOA meeting.  Apparently, some homeowners who had property on the creek had been seeing lots of big ass rats.  My former house may have been one of them, I’m not completely sure.  Regardless, I call bull shit on the rats.  Big ass rats are just way too easy and convenient of an explanation when a baby Chupacabre makes so much more sense!

If there are enough requests, I may do an instructional video series on how to protect yourself and your family with readily available, common household items.  I just need a volunteer to play the intruder.  Anybody?

*This is a two part series.  Stay tuned for my latest home self defense strategies, employed in a dire emergency within the last month.