We did a lot of that last Thursday night, even without being told, when he came through Birmingham, AL.  He and his band played to a sold out crowd at Iron City Birmingham, which holds 1300.

Selfie alert. After seeing some really awful pictures of me lately, I figured I’d throw in a good one. Thank you for indulging me.

The crowd was not what we expected.  Way less goth and more what you envision when you think of Rob’s album “Hellbilly Deluxe”.  It was a completely different crowd than we saw at the Arctic Monkeys concert.  I’ll leave it at that.

E and I got there early but still didn’t get to grab a seat in the balcony area as we had the previous two concerts we attended at Iron City.  We resigned ourselves to the floor and grabbed a spot by the wall so we could at least lean like the old people we are.  There is no seating on the main floor unless you’re handicapped.  I was handicapped after this concert because after 4 hours of standing, jumping and stomping in the shoes below, I could barely walk out of the venue.  It’s been a week and I still can’t feel a few of my toes.  I’m not joking. 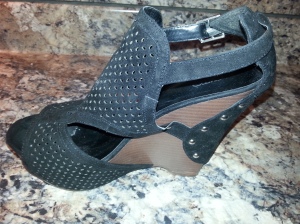 I could attempt to make out like I’m some music expert reviewer but I would fail miserably so I won’t. I will say that I know the difference between a shitty sounding live performance and one that’s exceptional. Rob Zombie was exceptional. They sounded awesome the entire time, which I imagine is pretty difficult given the material he sings. There was a brilliant drum solo by Ginger Fish (I know, I know, I can barely type that name with a straight face). John 5 gave us an epic guitar solo which included a bit of Eruption, the greatest single rock guitar solo of our time, in my opinion.

Here are just a couple of the performances captured from the concert we attended.  As you can see in the videos, Rob Zombie is surprisingly a very good dancer.  It’s almost hypnotic.  They should do a fitness video based on one of his concerts.  He’s 5 years older than I am yet he could kick the ass of just about any 25 year old lead singer out there today.  I don’t think he stood still during the whole concert.

“Dragula”, a Halloween staple at our house and also the encore song of the night.

Chew it up, spit it out, “Sick Bubblegum”

Right before singing “Pussy Liquor”, Rob told us to hold on to our pussies.  And I did.

And the darkest song of the night, Lords of Salem.

Rob told us after the opening song (a cover of “We’re An American Band“, which was amazing) that he hadn’t played in that small of a venue in well over a decade. This was evident by the fact that they were only able to use maybe half of their regular concert set which includes classic movie monsters.  Rob said his management thought he was crazy when he told them to book him a gig in Alabama because he didn’t want to skip our state and also didn’t want to “sit on his ass in a hotel room for two days” waiting for the next gig. He let us know that he made a point to stop in and see us but he wasn’t an ass hole about it. He thanked us for coming, interacted a lot with the crowd and even walked around the whole venue at one point.  I’m not sure if this has ever been said before but Rob Zombie is gracious. He threw Birmingham one hell of a party.

My litmus test for deeming a concert awesome is if I would pay to see the performer again.  Based on this concert, I will give Rob Zombie my money every single time I can in the future.  I highly recommend you go see him if he’s coming to a town near you.  And thanks for coming to see us, Rob.