“Well, it had already not been a very god day and just now I’m pretty sure I firmly made it onto the neighborhood prayer list.”

That was my Facebook status a couple hours ago.

E has been out of town, our crazy ass cat has been missing for about a week now, we just fought a war against fleas in our basement with what I’m sure are canisters filled with stuff on the government’s “Shit Terrorists Buy” list and a spider got to second base with me in my kitchen earlier today.

Okay, let’s back up.  I’ve been drinking and I’m now listening to Judas Priest, for frame of mind reference.

Our crazy cat, Snow Ball, went missing a week ago.  He adopted us a few years ago.  We tried to integrate him into our household but he made it clear he wasn’t a house cat.  Snow Ball also didn’t like being touched and after the second time he scratched my hand, the deal was sealed.  I’m not a cat person anyway.  Nothing personal, cats who may be reading this.

Since then, Snow Ball has been happy to be the neighborhood cat and even calmed down enough that he allowed petting.  After a while, Gracie and E could cradle him in their arms like a baby and he tolerated it.  I sort of like my face so I never tried that Faces of Death maneuver with him.  We would take him to the vet for checkups, shots and monthly treatments, feed and water him, and even installed a pet door to our basement so he could be sheltered in extreme weather.  The arrangement worked for all of us.

He was our greeter every time we came home.  He’d run halfway up a tree then just hang on, like “Hey, look what I can do”!  He’d stalk the Jeep as we drove down the street and hide between bushes like we couldn’t see his snow white ass.  He’d jump through the cat door while I was doing laundry and take about a month off my average expected lifespan every single time.  He’d stalk our poor dog, Allie, while she was trying to take a dump in the yard.  Snow Ball wouldn’t hurt Allie, he’d just stalk her through the monkey grass and then jump out at her.  The poor dog still can’t do her business without looking behind her in paranoia.  Just a few weeks ago, Snow Ball left a huge hairball/miscellaneous-pieces-of-shit-wad on the hood of my Jeep, right in front of the driver’s side like a little “Fuck you!”

Fine.  I kind of miss the damned cat.  Are you happy now, cat readers?

E warned me before he left town to be on the lookout for cat carcass in the basement.  Between the fleas (which seem to be gone) and a possible dead or dying cat, I’m a bit jumpy when I go to the basement now.  I know if anyone will find Snow Ball, it will be me.  That bastard is going to choose a day E is out of town to be found dead and half decayed in my laundry room like a final little “Screw you.”  I know that sounds selfish and cruel but that’s the kind of relationship Snow Ball and I had.  Don’t judge me.  He’d expect the same damn thing from me and would be disappointed with anything less.  In my attempt to preempt and foil his final middle finger (claw?) to me, I’ve been opening the garage door with the opener every time we get home, just praying that if anything’s dying in there, it’ll have some last breath decency to limp out and do that shit outside.

I am truly a kind and loving person.  I just feel the need to reinforce that right now.

Let me rewind a little further in the day.  Be patient, this all comes together in the end.  Hopefully.

Earlier today, the kids and I were about to leave the house for dinner.  I had on shorts and a bra and tank top combination that makes my boobs look like two distinct and totally separate missiles, ready to launch.  I’m not bragging here.  It’s fact.  I don’t know what it is about this combo, it just IS.  I hadn’t put my Foo Fighters tee shirt on yet so those babies were sticking out there like great majestic twin peaks. 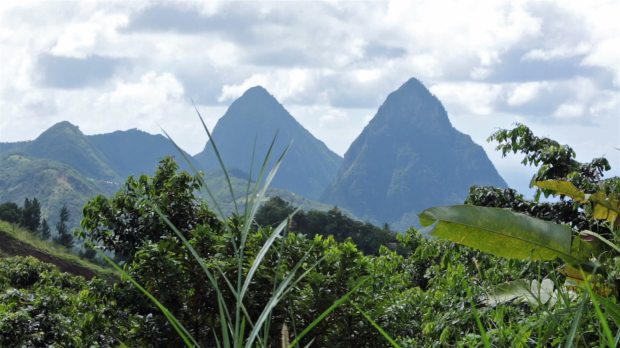 Like this but without all the grass.  And not bumpy.  And no one has ever died by falling off of them.

I was drying my hands with a towel when I saw something dark and small jump down my tank top.  Then I felt something small inside my bra.  I threw the towel across the kitchen and started the search.  Yep, there it was, frantically trying to climb up my peaks.  My traditional Die, Spider, Die! dance was unsuccessful so I proceeded to undress in the kitchen to recover the little bastard, all the while yelling at Landon to stay out and “Look away!  Look AWAY!”

After the kill, I looked up to find Gracie staring at me like I’d lost my mind.  I showed her the spider carcass so she wouldn’t call 911.  She just nodded slowly and calmly while giving me a tiny little smile, which I’m assuming was employed to not upset the crazy person she calls her mother.

After dinner, I went to the gym.  When I got home, I opened the garage door with my opener and performed my now common Dead Cat Test.  When nothing staggered out, I nervously and quickly ran into the basement to start the dryer, then ran back to the Jeep to collect all my shit, which included my purse, the mail, the small cooler I keep my bottled water in when I go to the gym and my keys.  I entered the Jeep through the passenger’s side, which hardly ever gets used during the week and when parked is right under our deck.  After the spider/boob invasion earlier today (have I mentioned I’m a bit jumpy?!), the thought of walking through a spider web fleetingly crossed my mind but there wasn’t one.

As I had my hands full, walking up my sidewalk to the front door, I recalled the time E walked full-on into a big ass spider web which covered and stubbornly clung to his entire head and has freaked him the fuck out to this very day.  I didn’t see this go down but I heard all about this massive web attack immediately after it happened.

So, as I’m walking up my sidewalk, recalling this traumatic spider event in E’s life, I finally started to relax after my very jumpy, paranoid day and I laughed out loud.

Did you read that?  Are you still with me?  I.laughed.out.loud.

And that is the exact moment when that bitch Karma showed herself in all her nude glory and I walked right into the giant spider web which stretched across my entire face like plastic wrap (the good kind, not that generic foolery) and would not relent and let the fuck go.

The cooler, mail, my purse and keys went flying, scattering all across the sidewalk and lawn.  I immediately started trying to claw the web off my face, imagining the horrors it could contain, all while initiating my Die, Spider, Die! dance for the second time in a day and shouting obscenities at the top of my lungs, much like this:

We live in an older neighborhood with a lot of elderly people.  One in particular is an older lady who is gracious enough to watch our house when we’re out of town.  Her strength is noticing details.  Every single detail.

If I went missing one day, E wouldn’t be able to tell the police what the hell I was wearing.  My comfort, if you want to call it that, is knowing that Ms. Jan would not only be able to tell the police what I was wearing but also the bra color she saw me take off at 5:00 p.m. through the kitchen window as I was doing my first Die, Spider, Die! dance earlier today.  She would also be able to reliably and faithfully tell the police that on top of performing the above Ace Ventura bat dance, I also yelled “Motherfucker!”, “Holy shit balls!”, “Oh my God, you bastards!”, “FUUUUCCCCKKKKKK!” and sadly, used the good Lord’s name in vain (which I almost never do) at the top of my lungs tonight in our front yard.

After Landon helped me find my keys in the yard, I immediately burned all my clothes in an attempt at some kind of Scorched Earth Policy against the spiders and took a shower which, once again, Ace Ventura accurately depicts for me.

I’m still inspecting my boobs to make sure there’s not any sort of bite marks on them. I look like a mad woman, feeling myself up all the time, trying to make sure both of my breasts are the same size and one isn’t swelling up to the size a damned football.  Every blemish on my face could be approaching death from the sidewalk web attack.  I keep flexing my wrists like Spider Man to make sure webs won’t shoot out.  If I hear one weak “meow” from the basement, I will lose my shit.  All of it.  Every last bit of it.

Did I mention it hasn’t been a good day?